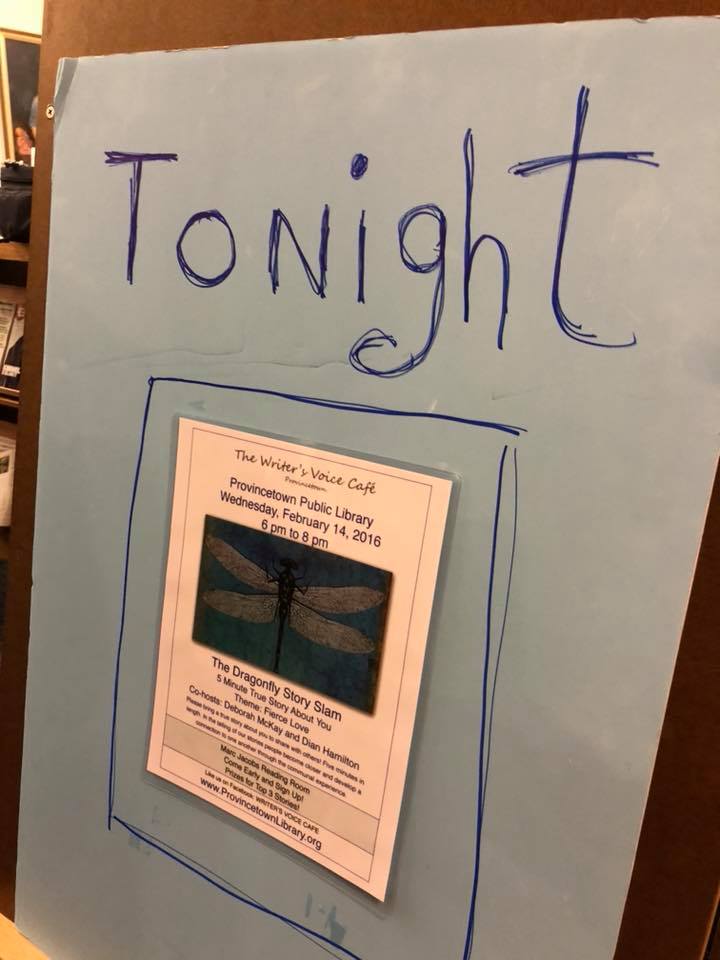 The intentions, wishes and dreams sent out into the world often come back. Opportunities magically appear like gifts from the universe. They are ours to unwrap, but are we ready? Do we have the clarity to see them for what they are, invitations for expansion? Are we brave enough to tug at its wrapping and see what unfolds?

As a new year arrived I looked forward. I had a bold dream of standing on stage at a Moth event, presenting a story to a live audience. The Moth provides a venue for men and woman to tell personal stories that deeply touched their lives; it is raw beauty at its finest. Realizing that starting with a large venue like the Moth would be challenging, I wondered if there were smaller, local events that I could participate in. My wondering words left my lips during a wooded walk, where tall trees swayed and danced, my intentions found flight and were lifted up so gently; I had not even realized it.

A few weeks after, suffering from a bit of cabin fever, I took editing on the road to Provincetown. Never having been at this library, I took time and lingered among the stacks and found myself staring at a wall of flyers. An announcement of two events jumped out at me. The first one was called, The Dragonfly Story Slam, apparently in its eleventh year, was taking place the following week at that library. It was modeled after the Moth, but held in a much smaller venue. The second announcement was an Open Mic Night, being hosted closer to my home, where I could read my original poetry.

Hot Damn! Two opportunities for expansion? Yes and yes! There was no question, I was doing them both. It was clear to me that there was a synchronicity to this spontaneous trip down cape and the flyers that were posted in my line of sight. This was not a coincidence; it was divine intervention. My mantra for this year was to “be seen,” to take risks and to practice the art of standing in my truth. The universe placed these opportunities into my open hands. Who was I to say no?

The open mic event was first. I spent a day or two reading my poem, Sovereign, out loud. I felt fairly confident and the reading went smoothly. I was blown away by the talent and bravery of all of the people who shared that evening. The energy of being surrounded by other folks, who were standing in their own light, was deeply moving and empowering. As I sat blissed out it occurred to me that I was not comparing. Instead, I was allowing myself to become filled and not lessening the experience by holding out the yardstick, or wondering if they liked my work. I did not tap into the old pattern of “not enough.” I believed I was worthy to receive.

Next stop—the story slam. It was scheduled on the very next evening; Valentine’s Day and the topic was Fierce Love. No pressure, right? After attempting to piece together a couple of recent essays, I realized it was not going to work. Memorizing was never a strong suit for me, so even if the story blended together, I would not have been able to recite it. I was still flying high from the night before and figured that just by going, I had already won. I had nothing to lose and if being seen is the purpose of this exercise, then I would stand and be seen, and hope that something coherent would fall from my mouth.

That day I jotted down a rough outline, and some notes for the story I wanted to tell. As the day carried on, I realized once again, that I knew the story—it was mine to tell—it was not something I needed notes for, it was inside of me. Trust and pray. I returned to my center and got quiet. In silent prayer, I turned it over and over and over.

When we arrived at the library that evening, it crossed my mind that I could bail; I could sit and enjoy the other stories. As quick as that thought came in, I dismissed it, and picked up the pen and added my name to the list. As I sat in the audience, I felt my nerves, and wondered if this was in fact, a good idea. The woman before me spoke about going with the flow, and even asked us to do a breathing exercise with her. Funny how things fall into us, exactly when we need them. She was number one and I was number two. Up I went. I stood proudly at the podium and told the crowd I was nervous, cracked a joke and moved on with my story.

I began to do the scary part. No notes. No outline. Unscripted, but isn’t this how life really was?

My story came out easy. I could feel the energy of intention and the electricity of grounding into my true self. In my actions, I was tilting my head up to the sky, and embracing the light that was in me all along. My heart was bursting with gratitude for the lessons and gifts that I was able to send and receive.

Send out your wishes, dreams and intentions to the universe and see what happens. Follow the signs and allow yourself to step into your power. You are more ready than you know. Trust and believe. Magic awaits you!